Playing a Victorian Lady in ‘The Invisible Woman’

Daphne Neville appears at the beginning of this trailer for The Invisible Woman, directed by Ralph Fiennes.

‘Truly, Mr Dickens,’ she assures him. ‘It is never so alive as when it is spoken by its author.’

The hectic scene featured at the start of this official trailer was shot on location at Harrow School where Daphne’s grandson was a pupil. Her wig was originally made for Judi Dench, she rather liked the bonnet and had a wonderful driver. 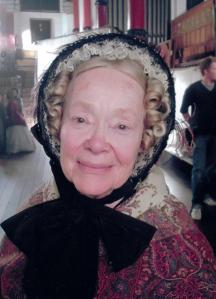 Written by Abi Morgan,  and also starring Felicity Jones and Kirsten Scott Thomas the film has been described as ‘brilliantly acted, vibrantly alive… ‘

Since the movie trailer has been watched nearly 4,800,000 times, we have great expectations.